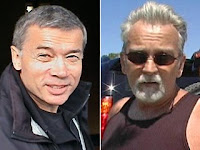 Bruce Jessen, left, and JimMitchell
As Senate Reports confirm Rumsfeld responsible for Torture Program (HERE), more revelations about the program emerge and calls for an for an independent, outside investigation of the American Psychological Association's (APA) ties to the Pentagon also increase. (HERE)

According to current and former government officials, the CIA’s secret torture program was designed by Psychologists James Mitchell and Bruce Jessen. They were paid $1000/day to design and implement the US torture program.

Bruce Jessen and Jim Mitchell, now working out of an unmarked office building in Spokane, Washington, together founded Mitchell Jessen and Associates . They are both former military officers who had no interrogation experience, as per former U.S. officials who say the two men were essentially the architects of the CIA’s interrogation plan.

“The whole intense interrogation concept that we hear about, is essentially their concepts,” according to Col. Steven Kleinman, an Air Force interrogator….

But it turns out neither Mitchell nor Jessen had any experience in conducting actual interrogations before the CIA hired them.

“They went to two individuals who had no interrogation experience,” said Col. Kleinman. “They are not interrogators.”

Michael Rolince, former section chief of the F.B.I.'s International Terrorism Operations, says that the tactics were a "voodoo science" .

According to a person familiar with the methods, the basic approach was to "break down [the detainees] through isolation, white noise, completely take away their ability to predict the future, create dependence on interrogators."(Vanity Fair, Katherine Eban, July 17, 2007)

Mitchell and Jessen were first exposed in July 2007 (article HERE) as the CIA psychologists who reversed engineered US military SERE training methods for the Bush administration’s torture program.

"The reverse-engineered SERE tactics that had been designed by Mitchell and Jessen, road-tested in the C.I.A.'s black sites, and adopted in Guantánamo were being used in Iraq as well. One intelligence officer recalled witnessing a live demonstration of the tactics. The detainee was on his knees in a room painted black and forced to hold an iron bar in his extended hands while interrogators slapped him repeatedly. The man was then taken into a bunker, where he was stripped naked, blindfolded, and shackled. He was ordered to be left that way for 12 hours."

SERE stands for Survival, Evasion, Resistance and Escape; it is a training program for US military personnel at risk of capture. As part of the program, trainees are subjected to harsh and abusive psychological interrogation methods — largely derived from Cold War techniques employed by Soviet and Chinese interrogators to extract false confessions.

Posted by Caravan - Stop Canadian Involvement in Torture at 10:19 AM