"Destroying the Evidence" ...in Egypt 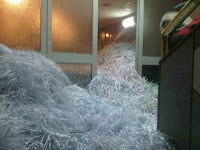 Hundreds of Egyptians stormed the headquarters of the nation’s secret police, seizing secret documents and evidence of torture.


A full report by McClatchy newspaper: