Canada, SIDE BY SIDE with the the American Torture Program? Is the worse still to be seen? 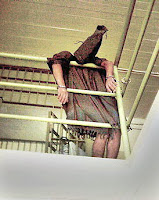 Many and probably the most horrendous photos of the torture in Abu Ghraib were never released to the public.

And this is probably only a fraction of what the USA has been hidding when it comes to its Torture Program . Clearly, the true colours and depth of the American torture Program is still unknown to the public.

Is some of the worse done by the American government and its accomplices going to come out?

Hypocrisy and lies are still the rule even under the new administration. Do the majority of Americans care ?

In the "North America" of today, accountability doesn't seem to be a priority. Secret Services in both USA and Canada, CSIS/RCMP, CIA/FBI and others have comfortably been covering up their wrongdoings with the help of "secret laws", "secret trial" and who knows what else.

Impunity to criminal activities and to criminals inside governments, in the same (or even "enhanced") old American Style that kidnapped, assassinated and tortured thousands in Central and South America only some years ago are, at least up to now, acceptable and part of the "North Americam life style".

As with Canadian "alignment" with the American Torture Program, complicity from neighbour countries , "indirect torture" or "torture by proxy", no matter what one wants to believe in, was already an American style of getting the job done. It is the same old , same old...

Central and South America were the so called “American Backyards”...Is Canada the new “American Backyard”? Passively and submissively “the mouse under the foot of the elephant” tainting its reputation in the name of some extra dollars for its “secret services”, some brand new SUV's and other “perks”? What could possibly explain the Canadian involvement in the abhorrent American Torture Program? Hopefully Canada will wake up from the illusion that the American “friendship” is more valuable than its own citizens. The future is dark if not !

(for more on the issue see "Killing Hope: U. S. Military and CIA Interventions Since World War II - by William Blum or visit the post on the Invictus Blog by clicking HERE )

The American way of torturing, kidnapping, murdering and more, along with its lies, secrecy and most of all, no accountability , as it looks like up to now, has come to North America .

But regardless the American way of covering up its and that of its accomplices wrongdoings, once in a while Courts take some action and on March 17, 2009:

"A federal court rejected a Bush administration request to reconsider a decision that ordered the Department of Defense to release photographs depicting the abuse of detainees by U.S. forces in Iraq and Afghanistan. The U.S. Court of Appeals for the Second Circuit rejected the government's request to have the full appeals court rehear a decision from last September ordering the release of the photos as part of an American Civil Liberties Union lawsuit seeking information on the abuse of prisoners held in U.S. custody overseas.

The Obama administration, which has not taken a position on the litigation, has 90 days to appeal to the Supreme Court if it chooses to challenge the September order.

"This decision is a stinging rejection of the Bush administration's attempt to keep the public in the dark about the widespread abuse of prisoners held in U.S. custody abroad," said ACLU staff attorney Amrit Singh, who argued the case before the court. "These photographs demonstrate that prison abuse was not aberrational and not confined to Abu Ghraib. Release of the photographs would send a powerful message that the new administration intends to make a clean break from the unaccountability of the Bush years."

RCMP/CSIS - CIA/FBI - Canadian Complicit in what???

Posted by Caravan - Stop Canadian Involvement in Torture at 11:56 PM