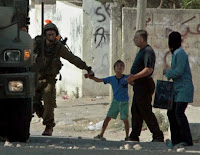 "There was a dog barking outside the room… The soldier told me he would bring it in to f**k me if I didn't confess… I was so scared… The guy then took out a stick; he whipped it forward and it got longer. He told his friends, who were looking on and laughing at me: "This boy doesn't want to talk. Let's pull down his pants so I can shove this stick up his a**."

"I tried to hold on to the chair; he kept poking me, groping my privates with the stick, trying to get me off the chair," N said while avoiding eye contact with me.

The Palestine Chapter of Defence for Children International (DCI) has collected 100 sworn affidavits this year of Palestinian children, under the age of 18, who said they were mistreated by their Israeli interrogators. Fourteen of them say they were either sexually abused or threatened with sexual assault, including rape, if they didn't confess to what their interrogators accused them of."

Posted by Caravan - Stop Canadian Involvement in Torture at 12:50 AM