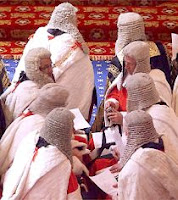 Last Friday Lord Justice Thomas and Mr. Justice Lloyd Jones , issued a sixth judgment on the case (PDF), declaring that the treatment of Mohamed “could never properly be described as ‘a secret’ or an ‘intelligence secret’ or ‘a summary of classified intelligence,’” .

They also restored two passages from their fifth judgment, which were removed at the request of the Foreign and Commonwealth Office.

Full text and details about the case HERE - "UK Judges Comapre Binyam Mohamed's Torture to that of Abu Zubaydah" - by Andy Worthington - November 26, 2009
Posted by Caravan - Stop Canadian Involvement in Torture at 10:08 PM