The Rape of the Sabine Women is an episode in the legendary History of Rome, Italy. In the context, rape means abduction - RAPTIO - as in the "extraordinary renditions" American program, rather than its prevalent modern meaning of sexual attack.

The Department of Anti-terrorism Strategic Studies (DSSA) was reportedly created after the 2004 Madrid bombings to combat Islamic extremism.

Genoa-based investigators carrying out a probe into the DSSA have arrested two people and placed more than two dozen others under investigation.

Many of those under investigation are said to be employed by regular law-enforcement bodies. Prosecutors believe that DSSA "employees" were sometimes using official police badges and other equipment to carry out their own investigations.

The alleged parallel force is also accused of illegally using the Interior Ministry database for its own purposes.

The DSSA operated its own website, which was disabled after the arrests were reported on Friday morning.

Reports say the site was available in four languages - Italian, English, French and Spanish - and profiled terror organisations as well as urging the public to come forward with information.

Italian state radio Rai later reported that the two arrested men may have had links with Gladio, the Italian branch of a secret paramilitary network set up in post-war Europe with the backing of the CIA.

There are also reports of a possible connection with a far-right political group.

The investigation that uncovered the alleged parallel structure is an offspring of a previous inquiry into the death of Fabrizio Quattrocchi, one of four Italians kidnapped in Iraq in April 2004.

Mr Quattrocchi was shot dead by the abductors, while his colleagues were eventually released.

TROJAN HORSE in "The Procession of the Trojan Horse in Troy" by Domenico Tiepolo (1773) ; The gorgeous Helena de Troia by Jacques-Louis David(1788) in "The Love of Helen and Paris" 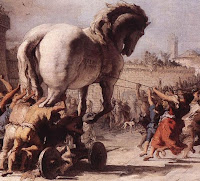 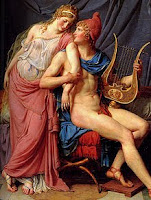 Posted by Caravan - Stop Canadian Involvement in Torture at 3:35 PM