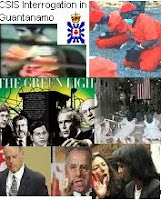 Spanish prosecutors decide to seek indictments against Alberto Gonzales, John Yoo, David Addington, Jay Bybee, William J. Haynes II and Douglas J. Feith on charges that they conspired to introduce a regime of torture that resulted in the torture of five Spaniards held at Gitmo.

The Bush Six labored at length to create a legal black hole in which they could implement their policies safe from the scrutiny of American courts and the American media. Perhaps they achieved much of their objective, but the law of unintended consequences has kicked in. If U.S. courts and prosecutors will not address the matter because of a lack of jurisdiction, foreign courts appear only too happy to step in.

READ THE DETAILS HERE.
Posted by Caravan - Stop Canadian Involvement in Torture at 11:17 AM