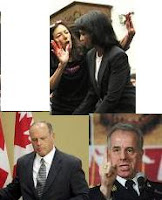 "It's illegal. It's immoral. It's unethical. And it doesn't work." (full interview HERE)

Expert's opinion on torture looks like the opposite of CSIS Representative Geoffrey O'Brian's opinion, who testified that torture is still useful in some cases..

And on Monday, April 6, the New York Review of Books publicly released a full version of the "strictly confidential" February 2007 report on torture, prepared by the International Committee of the Red Cross - Regional Delegation for the United States and Canada.

The report was leaked in part by journalist Mark Danner, who wrote a review of the report in April 9 edition of the NYRB. HERE

The full report can be read HERE.

The publication of the ICRC full report on CIA abuse of prisoners has rightfully sparked a new media scandal.

Following the report's release, on Thursday, April 9, CIA Director, Leon Panetta, sent a memo to Congress stating that the CIA no longer operates secret detention facilities or employs any of the "enhanced interrogation techniques" (torture) authorized by the Bush Justice Department.

Visit msnbc.com for Breaking News, World News, and News about the Economy

In addition to the Report information, experts and others familiar with the torture extracted "intelligence", have opinions that are the opposite of that of CSIS' Official(s) .

“We can’t measure the accuracy of this program by saying we’ve gone out and brought hard
and fast cases based on it. You cannot tell me whether any of these individuals or all of these
individuals have lied. You conceded to me that someone facing extreme anxiety and pressure
could yield false information. I add all that up and I come to one simple conclusion:
We can’t tell if this program is working…[W]e want to get the real terrorists and we don’t
know if you are succeeding in doing that or if you’re unearthing a bunch of lies.”

"Much of the threat information provided by Abu Zubaida was crap."

"COLEMAN: It's illegal. It's immoral. It's unethical. And it doesn't work."
––
More on the Report: HERE
(ICRC) describing as torture certain interrogation techniques used by the CIA and concluding that its medical officials had committed a "gross breach of medical ethics."