ARE INTELLIGENCE AGENCIES ABOVE THE LAW ? 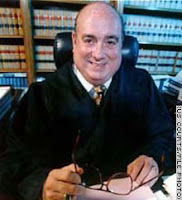 IN USA
U.S. District Judge Royce Lamberth has ruled that as many as six CIA officials committed fraud in order to protect an agent from a lawsuit.


"Lamberth also referred Jeffrey Yeates, a CIA attorney, for disciplinary action stemming from the suit, which was brought by a former agent at the Drug Enforcement Agency. Lamberth has delayed action until he determines if any of five others – including former CIA Director George Tenet – should face contempt charges or sanctions"

Shared via AddThi
Posted by Caravan - Stop Canadian Involvement in Torture at 1:38 PM