Convention on the Elimination of all Forms of Discrimination against Women is an international convention adopted in 1979 by the United Nations General Assembly.
It is described as an international bill of rights for women and it came into force on 3 September 1981.

For the purposes of the present Convention, the term "discrimination against women" shall mean any distinction, exclusion or restriction made on the basis of sex which has the effect or purpose of impairing or nullifying the recognition, enjoyment or exercise by women, irrespective of their marital status, on a basis of equality of men and women, of human rights and fundamental freedoms in the political, economic, social, cultural, civil or any other field."
The UN headquarters-New York,USA 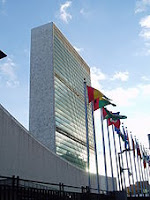 Seven countries have not ratified the international treaty:
-

Posted by Caravan - Stop Canadian Involvement in Torture at 11:14 AM